The following is an article from the UK Telegraph, written in December 2012, stating what we hairless cat owners have been saying for years. Enjoy!

Bald cats are friendliest, but “moggies” are the grumpiest, study finds

By reputation, they are aloof and solitary creatures, which only display affection grudgingly and judiciously.

But this popular perception of cats turns out to be unfair: while many are surly, this is down to their breed — and others are far more genial.

A study has ranked breeds of cats according to their friendliness, from the most affectionate to the least.

Those identified as the most unfriendly were non-pedigree, crossbreed “moggies” — also known as domestic short-haired cats — which are Britain’s most common variety.

They scored poor marks for their interactions with humans, being the most likely to ignore their owners and run away from strangers.

Pedigrees were found to be notably more amiable, and the friendliest of all was the hairless sphynx cat, which was even happy to visit the vet and be bathed. The researchers believed the sphynx’s affectionate nature could be due to its reliance on humans to keep warm.

The study also suggested that the greater affability of pedigrees came about because breeders tended to leave the kittens with their mothers for longer, during a crucial period in their development, when they are becoming used to humans.

It could also be the result of selecting more friendly cats for breeding.

The study, published in the Journal of Veterinary Behavior, involved 129 cats from 14 breeds, as well as crossbreeds.

The cats ranged from kittens to animals more than 20 years old; some lived in homes with children and other animals, and others with just their owner. The cats were a mix of males and females, with some neutered and some not.

Owners were asked a series of questions, ranging from how their cat would react when they entered a room, how often it would rub up against them, whether it would appear to avoid them, and how it would behave around strangers and vets. Each cat was given a “friendliness score” according to the responses.

The sphynx scored an average of 22.83, compared with 18.93 for the domestic short-haired. Because the numbers of other breeds in the survey were generally small, they were grouped together to score an average for pedigrees of 20.40.

In cases where there were more than just a handful of a particular breed, they were always found to be friendlier than moggies.

Maine Coons and Persians, for instance, scored 20.76 and 20.38. Other pedigrees to score highly were Birmans, Somalis, Siamese, Russian blues and exotic shorthairs.

Owners were given a list of four words to describe their pet. Pedigrees were generally “clingy” or “friendly”, and non-pedigrees tended to be “friendly” or “independent”. None was described as “wild”.

Dr Marie Abitbol, of the National Veterinary School of Alfort in Paris, where the study was carried out, said: “There is a clear difference in friendliness between the pure-bred cats and the domestic short-haired. In general, the pedigree cats are friendlier than non-pedigree.”

Sphynx cats are becoming increasingly popular, particularly with asthma sufferers because of their lack of fur, and can change hands for up to £3,000.

Steve Crow, the vice-chairman of the governing council of the Cat Fancy, said: “They are very, very friendly. You don’t see one misbehave or get upset very much.”

There you have it!  And when it comes to personality, KyTy Kittens provides some of the best!  If you have any questions about life with a hairless cat, don’t hesitate to email us at info@kytykittens.com, or check out our kittens page for what we have available now.

Have a Great Day!

Think a KyTy Kitten is right for you?

Please review our Terms For Adoption to learn the information necessary to take the next step. 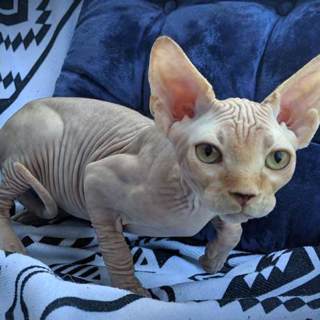 What Our Customers Say…

I got a male Kinkalow from KyTy Kittens a few months ago and am already waiting for more litters to be born so I can get another one from them. You won’t find a breeder that cares more about their animals. Kiley and Tyson even met up with me...